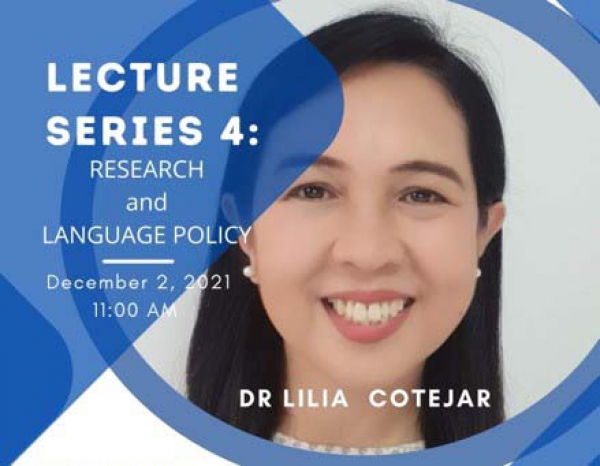 Language Policy accentuates the growth of the field by publishing high-quality studies that lay a strong foundation for the theoretical understanding of the subject area. Dr Lilia A Cotejar shared her experiences on research and language policy through a webinar titled  Research and Language Policy on December 2, 2021, hosted by the ELC, UTAS-Ibri.

Dr Lilia A Cotejar holds a PhD in English Language and Literature from Ateneo de Manila University. Writing mainly about Asian women’s novels, she is actively engaged in national and international conferences dealing with Asian women’s literature and regional writings. 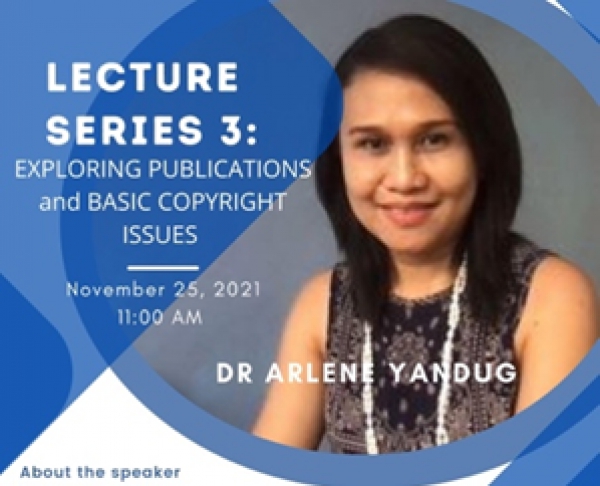 Research publications have their own identity, place and necessity. They make scientific information publically available and allow the academic audience to evaluate the quality of the research and explore it further.

Dr Arlene Yandug, based on her vast experience, shared a plethora of information on different ways of exploring publication and fundamental copyright issues. The UTAS-IELC Research and Consultancy Committee hosted the webinar on November 25, 2021.

Dr Arlene Yandug holds a PhD in Creative writing and poetry as her field of concentration at the University of the Philippines-Diliman. Her expertise is in poetry, journal policies, authorship criteria and literary publication. In addition, she has published her literary works in local and international editions. She belongs to the top 500 women poets in the Philippines and is a fellow in national writing workshops. Recently, she co-edited a literary anthology, Tinubdan (2021). 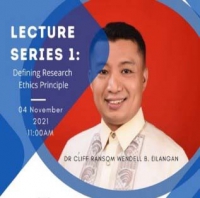 Research ethics give a detailed description of the application of fundamental ethical principles to research activities which include the design and implementation of research, responsibility towards the immediate society, the meticulous use of resources and research outputs with respect towards society and others, the use of resources and research outputs, scientific misconduct and the guidelines of research.

Dr Cliff Ransom Wendell B. Lilangan had an informative session on Defining Research Ethics Principles with the ELC staff at UTAS- Ibri. The virtual webinar was hosted by the ELC Research and Consultancy Committee on November 4, 2021. 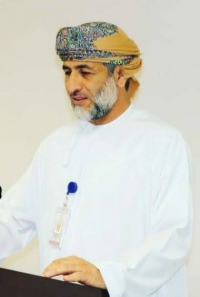 Problem-based learning (PBL) is a student-centred approach which encourages students to work in groups to find solutions to open-ended problems. This approach is popular among EFL teachers as it has become a driving force in many contexts.

A presentation on Problem Based Learning (PBL) on Thursday, 24 March 2022, encouraged the audience to share their views on integrating PBL techniques in classrooms.

The speaker, Mr Abdullah Al-Balushi, gave a brief idea of how to orient students to use Problem Based Learning(PBL) in various learning contexts. The session was explained in seven stages with quick tips to implement during teaching sessions.

Abdullah Al Balushi has been teaching at UTAS since 2011. He has the CELTA certification and a Master’s in the English Language. He has worked in different administrative and teaching positions in the ELC  during the last ten years.

In coordination with the Quality Assurance Coordinator of ELC, the Human Resource Department conducted an awareness session for the new staff on Individual Performance Management System(IPMS) on Thursday, 24 March 2022, at the ELC meeting room. The ELC coordinator Ms Zahra was the speaker and explained the objectives of the IPMS. The four objectives discussed in detail were a. building the culture of the quality performance, b.improving the performance evaluation system, and c. linking productivity with incentives. 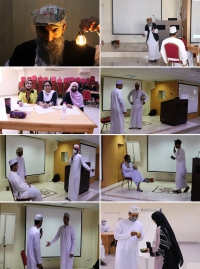 Roleplay is considered one of the important methods to achieve active learning. It engages the participants and instils confidence to present themselves before the audience.

Ms Nusaiba Al Ghafri and Mr Humaid Al Mamari, English language lecturers at the ELC, demonstrated the same through a  Role Play Contest at the Multi-Purpose Hall in the Engineering Building on Tuesday the 29th of March from 12:00 am to 2:00 pm. The participants were from groups two and eleven.

The contest was a platform for the students to enhance their speaking skills, build confidence, enhance creativity and imagination and accentuate their communication skills. A detailed explanation of the rules was provided to the students.

Four teams participated in the contest, three teams from group eleven and one team from group two. Mr Humaid Al Mamari started the contest by performing a short sketch called “The Silent House” to arouse students’ interest in acting and break the ice. The panel judges from the ELC Ms Anuradha, Ms Zahra and Dr Mobina announced the winner from the four teams.

After the contest, students participated in two other activities: Pictionary and Charades. These two activities were conducted to ensure maximum participation from the students. The vocabulary used in the activities was mainly from the course book, which was a good practice for the students to revise what they had studied earlier.

The role play contest was conducted for the first time in the ELC between two groups. The students showed great interest in it and increased their confidence and presentation skills. They also got very excited and hoped to participate in similar contests in future.

An Awareness Programme on Risk Management 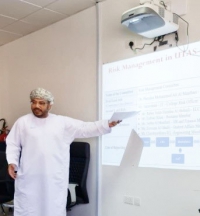 An awareness session on Risk Management was conducted on March 24, 2022, by the ELC, UTAS-Ibri. The speaker Mr Rabee Al Shekeili explained the objective of the committee to the newly recruited teaching staff. He clarified that the committee was formed to identify, prioritize, and develop action plans to avoid potential risks and consequences that may affect the efficiency of the college operations. He added further that to understand the risk management process, and one should be conversant to identify, analyze, evaluate and treat the existing and potential risks. The presentation also made the audience familiar with the registration process.

On behalf of UTAS-Ibri, ELC, Mr Mohammed Al Shammakhi gave a detailed presentation on the fire safety workshop on Thursday, March 10, 2022, at 10 a.m. The scheme of the presentation included fire triangle & classification, types of fire extinguishers, Use of fire extinguishers, rules for fighting a fire, and first aid for fire injury. The presentation, coupled with a practical demonstration by the Health and Safety Committee, created awareness among the staff and prepared them for contingencies.

Conducting extra-curricular activities aiming at academic excellence has always been a norm at UTAS-Ibri, ELC.

Ms Nusaiba Al Ghafri and Mr Humaid Al Mamari, English language lecturers at the ELC, organised a quiz competition at the Multi-Purpose Hall in the Engineering Building on Wednesday the 9th of March from 12:00 am to 2:00 pm. The participants were from groups two and ten.

The main objective of the competition was to test students’ knowledge prior to the quiz competition to generate their interest in learning English. A detailed explanation of the rules and the four rounds of the quiz was provided to the students.

The first round was based on grammar and vocabulary, and Kahoot, a free game-based learning platform, was used in the second round, and three winners were finalised. The third round had a quiz contest that involved all students from both groups, and five winners were selected.   The final round challenged the students to put the selected words into error-free sentences.

The competition was the first of its kind, and the effectiveness was evident.

The participants found the class and the quiz contest engaging and beneficial. It was a successful event where students were active, attentive, encouraged and enjoyed learning English.

The English Language Centre, of UTAS-Ibri has always been an anchor for the IELTS aspirants. As part of its novel initiative, a 2-day refresher course in IELTS was conducted on the 23rd and 24th of February 2022, from 4 pm to 6 pm.

This course was designed to train and prepare students for the IELTS test. Dr Abdulsalam, Head of the ELC, welcomed the students and encouraged them to seize the opportunity provided by the ELC of UTAS-Ibri and progress in their selected careers. The course was designed and customized by conducted by Ms. Sharon Devaneson. The participants were shown the samples of common errors while practicing listening, reading, writing and speaking skills. She discussed the strategies that could be used to overcome these problems. A few links and handouts of a complete sample IELTS test were given to the students for self –study. The sessions were highly interactive as the participants asked for clarifications and showed immense interest in the sessions. The sessions instilled immense confidence and was a much-needed platform for beginners. These students showed great zeal and determination to achieve the IELTS 5.0 needed for their bachelor's degree programme.  The course was a game changer for the beginners and a defined goal for those who wanted to reach the next milestone.