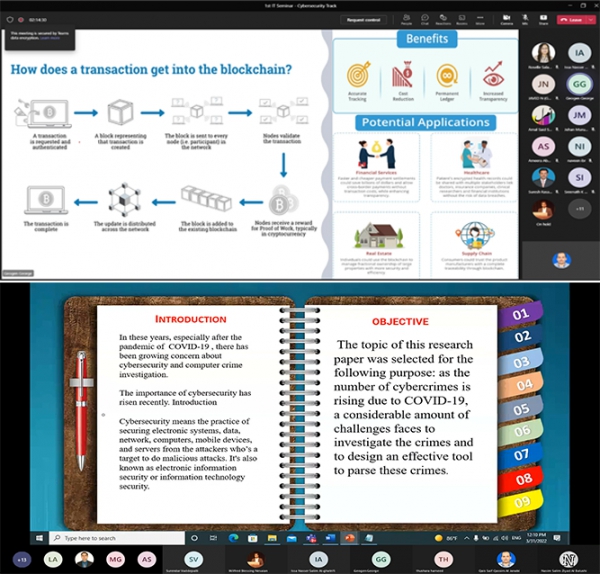 Aligned with Oman vision 2040, as an initiative to bridge the gap between industry and academia, the IT department has organized a one-day online seminar on March 31, 2022.  It was coordinated in dual tracks: cybersecurity and data science and each track was in two sessions. The primary purpose of the seminar is to provide a platform for sharing the latest scientific research outcomes related to the topics of cybersecurity and data science with industry decision-makers and community influencers.

Moderated by Mr William Ancheta, a lecturer in the IT department, the seminar has commenced at 9:30AM. Following the opening note, a phrase from the Holy Quran was recited. Afterwards, Mr Abdullah Al-Shukeily, an IT-Lecturer, representing the department council, delivered the welcome message addressing the participants and emphasizing the seminar's primary motivation and the designated impact.

After the inauguration ceremony, a keynote speech on Data Science was delivered by Dr Suresh Rasappan. Dr Suresh has presented an overview of data science and its significance in today's world, where data are generated in massive amounts. He also shed light on the industries' needs in data science from different perspectives, including integrating data from various sources, lack of proper understanding of data, data growth issues, confusion while data analysis tool selection, lack of information professionals, and securing data.

In the second session of the cyber security track, Dr Musab Al-Rawi presented his research titled "'NetAccess': Networked Access to Computerized-System Using Iris", in which he presented an Iris based recognition system for building access control. Mr Geogen George has presented his research work titled "Distributed Light Weight Blockchain Security in Fog Computing for IoT". He discussed the limitations of existing blockchain implementations in IoT technologies. Moreover, he demonstrated his ongoing research by proposing a new modified Blockchain with a modified header. It uses a new hashing that helps the blockchain process large amounts of incoming sensor data and provide the same to FOG on demand. Finally, Ms Nasim Al-Balushi has presented her research on the impact of COVID-19 on cybersecurity in the Sultanate of Oman. In her talk, she has demonstrated how the COVID-19 pandemic has created new challenges for security specialists.

On the other track of the seminar, the data science track, Dr Amal Al-Abri was the first presenter. She presented her research work titled "Mining model for semantic relation extraction and ontology representation in a personalized e-learning environment". The proposed research aimed to provide a personalized e-learning environment using social collaboration tools for collaborative learning activities. Then, Dr Mastan and Dr Rajasekaran presented their research titled "Effective use of data analysis and data visualization in e-learning". Their research has presented a sample case study that focuses on how the University of Technology and Applied Sciences (UTAS) will effectively utilize data science in the E-Learning platform.

Afterwards, Mr Mangesh Wanjari presented his topic titled "Self-organized criticality-based Twitter data analytics". In his study, he analyzed the Twitter Data and the dynamics of the interactions in Twitter between nodes corresponding to the Self-Organized Criticality (SOC) principle. Also, he discussed his findings on whether the trending topics on Twitter follow a similar SOC-based earthquake model and demonstrate the evolution of physical systems.

During the second session, Dr Pugalarasu Rajan presented his research work titled "Ecological Model with Prey Harvesting System". His study was an approach to analyzing the complex relationship between prey and predator through studying the dynamics of prey-predator interactions. This was followed by a presentation delivered by Dr Sanal Kumar on Domination polynomial in directed graphs. His presentation discussed the domination polynomial of some standard digraphs to various network problems involving directed interactions. Finally, Dr Dilwar Islam has presented his topic on anisotropic cosmology titled "A study of anisotropic cosmology of general theory of relativity".

The seminar was concluded at 2:30PM, and the closing remarks was delivered by Mr Abdullah Al-Shukeily. The seminar has received positive feedback from the 31 participants with score of 4.54 on a scale of 1-5 where 5 was the highest.  It is worth to mention that there were 92 participants who joined the seminar throughout the sessions. All attendees and presenters were awarded a certificate of appreciation on behalf of the IT Department, UTAS-Ibri.

Read 12 times
Sunday, 22 May 2022 00:00 Written by  IT Department In IT
Tweet
More in this category: « Electronic Extortion Python Programming (Beginners) »
Login to post comments
back to top
Back to top